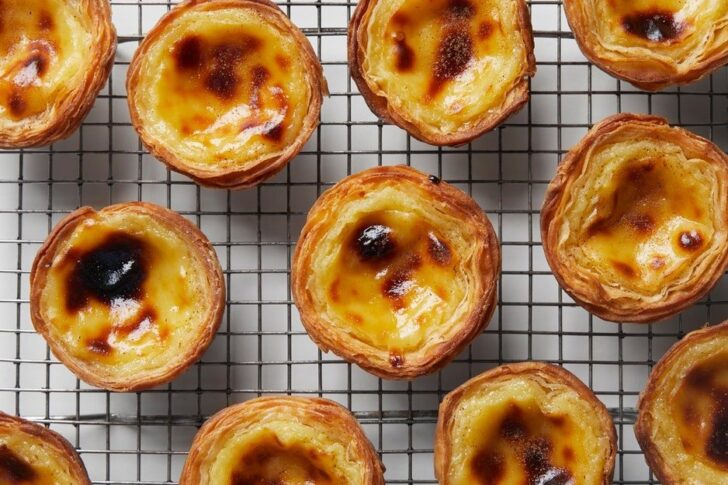 For the Puff Pastry:

For the Filling and Garnish:

Make the puff pastry: In a small bowl, whisk the butter until it is the consistency of sour cream. In the bowl of a stand mixer fitted with the dough hook, combine the flour, water and salt. Mix on low speed,  scraping the bowl down occasionally, until the mixture comes together and has a tacky consistency.

2. Transfer to a well-floured work surface and form into a 1-inch rectangle. Using a floured rolling pin, roll the dough into a ½-inch-thick rectangle, 10 inches long. Cover with plastic wrap and let it rest for 15 minutes.

4. Spread the remaining butter all over the dough, leaving a 1-inch rim. Starting with the edge closest to you, roll the dough into a tight log. Wrap in plastic wrap and refrigerate until very firm, at least 2 hours, preferably overnight.

5. Make the filling: Preheat the oven to 500°. In a medium saucepan, combine the sugar, water and cinnamon stick over high heat. Bring to a boil and cook for 1 minute, then remove from the heat and let sit until ready to use.

6. On a lightly floured surface, trim the ends of the dough to make sure they’re even, then cut the log into thirty ½-inch slices. Place each slice into the cavity of an egg tart mould or muffin tin, with the cut side of the spiral facing up. Use your thumb to press the centre of the spiral into the bottom of the pan and continue pressing to evenly flatten the dough against the bottom and sides of the cavity, extending about 1⁄16 inch above the rim of the tart moulds or ¾ inch up the sides of the muffin tin. Repeat with the remaining dough. Refrigerate until firm, 10 minutes.

7. Meanwhile, in a small saucepan, heat 1 cup, plus 1 tablespoon, of the milk over medium heat until bubbles begin to form around the edges, 4 to 5 minutes. In a large bowl, whisk the flour with the remaining 5 tablespoons of milk. Continue whisking while adding the hot milk in a slow, steady stream. Discard the cinnamon stick from the sugar syrup and whisk the syrup into the milk mixture in a steady stream. Return to the saucepan and cook over low heat, whisking constantly, until thickened 10 to 12 minutes.

8. Add the yolks to the mixture and whisk until well combined, then strain through a fine-mesh sieve. Pour 1½ tablespoons of the warm filling into each pastry shells.

9. Bake until the shells are golden brown and crisp, the custards are set, and the tops are blackened in spots, 15 to 20 minutes. Let cool in the pans on wire racks for 5 minutes. Then, remove the moulds, transfer the tarts to the wire racks and sprinkle with cinnamon. Serve warm.