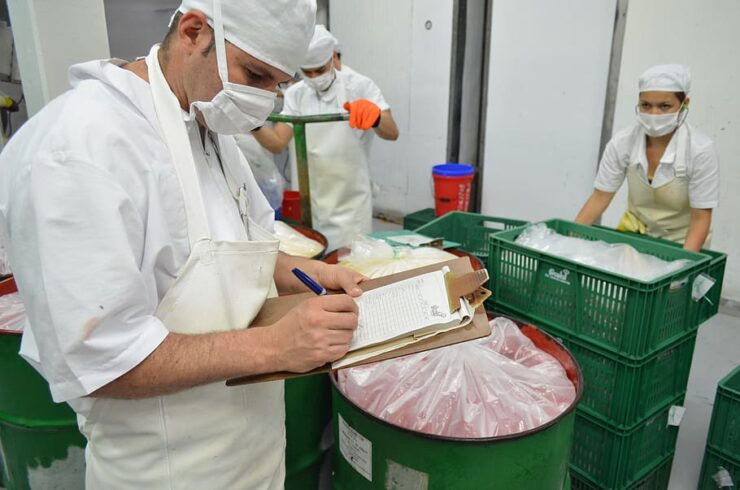 Blockchain and the food industry- the two seem so far apart that it is almost impossible to imagine how they could ever fuse.

The blockchain is indeed more synonymous with finance and the payment system. Still, the depths of its potential remain unlocked, and indeed, undiscovered by most. Luckily, those in the know are happy to share the knowledge, providing solutions to problems in many industries.

What is the Blockchain?

The blockchain is the invention of the anonymous developer (or developers?) Satoshi Nakamoto, who detailed the workings of a decentralized digital ledger in his Bitcoin whitepaper. At the time, the invention was the first of its kind, capable of providing solutions to digital finance on a vast scale.

Today, many cryptocurrency tokens are running on different blockchain networks. These blockchains are together referred to as the blockchain industry because they all run on the same principles as the first blockchain.

These tokens are traded on a cryptocurrency exchange where tokens like Bitcoin and Ethereum are exchanged. You can learn more about these by visiting the website of Paybis and checking out articles there.

The blockchain itself is a conglomeration of intricately assembled, highly encrypted hashes containing sensitive information on financial transactions.

The blockchain is a computer program that works with the consensus of all the nodes in the network. Each transaction is immutable and personalized for the two parties involved. There is no third-party involvement, such as a Central Bank.

The lack of third-party involvement is what makes financial transactions on the blockchain so favorable. For starters, transactions are fully transparent and visible by everyone on the network, so there’s no chance of fraud.

Secondly, the transactions are highly encrypted, with there being zero chance of malicious incursion by a third party or any of the parties involved. In addition, everyone on the network has a copy of the ledger, which is continuously updated.

The users of the network can be anyone, be they suppliers or customers. This brings us to how the blockchain can benefit the major players in the food industry.

Problems of the Food Industry

The food industry is plagued by several problems, many of which can be traced to distribution, logistics, management, and inventory. These problems affect the global supply chain. Here are some of them:

Except your business uses inventory management software (which is very expensive to subscribe to), you will have to cope with product traceability problems.

In addition, it can be difficult for customers to track the composition of the foods that they buy. In the case of meticulous customers who are curious as to exactly what each consumable component consists and stems from, the current methods may be dissatisfactory.

It is also important for food companies to track these products and the processes involved in their production.

In the food industry, labels do not necessarily correspond with the contents of products. Many companies are indeed honest with ingredient listings and the composition of their products.

However, by far, most food-producing companies are not fully forthcoming, meaning that consumers can be misled. This is not right, especially with consumers on strict diets.

This is a very common problem facing the food industry. With each genuine product come tens of low-quality replicas. These replicas closely resemble the real thing and continue to deceive the consuming public.

Upon their discovery, the consumers are quite naturally disappointed, embittered and will often stop buying the product altogether. This is not favorable for production companies, which lose much-needed revenue as a result.

Just as well, a substandard product can constitute health issues for unwitting consumers.

How the Blockchain Can Revolutionize the Food Industry

The blockchain can counter all of the problems highlighted above in the following ways:

Blockchain technology will help to manage issues related to food safety through improved transparency. This way, the big companies and food producers will easily be able to trace product origins.

Fraud is only possible when the means of data collection is flawed. Food businesses and companies would do well to use blockchain technology to ensure fewer inaccuracies, errors, bugs, and hacking.

In addition, it makes it easy to trace the culprit of such frauds whenever they do occur.

Using the blockchain, it is possible to conduct far-flung business transactions without the inconveniences of crippling transaction charges.

One major advantage that the blockchain has over traditional payment systems is reduced charges. When translated into the food industry, it means more profit for the producers, better value, and increased consumer supply.

The blockchain can help to automate food production processes, eliminating production line discrepancies as a result.

As far as payment methods are concerned, you can’t go better than the blockchain. It is ideal to have your financial networks set up to accommodate cryptocurrency payments. They are fast, highly secure, and are less likely to give you chargeback problems as a supplier.

The future of blockchain technology is indeed bright, with promising potential in the food industry indeed bright.

In fact, many top food-producing companies have begun to use the technology in their operations for improved food safety, security, transparency, and payment fluidity.

As a food-producing company seeking to expand borders, blockchain technology is something you should strongly consider. You will witness not only increased business capability but also overall financial growth.