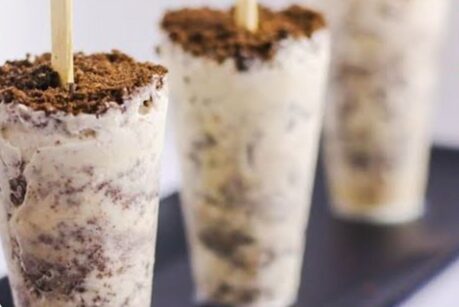 1. Put oreo biscuits with cream in ziplock bag and crush it by using the rolling pin or you can use hammer. Put vanilla icecream in a mixing bowl and add crushed biscuits and mix it well. After mixing icecream will become in the form of semi melt.
2. Now take 4 to 5 biscuit in ziplock bag and again crush it to make oreo crumbs. Keep aside.
3. Now take Popsicle mould, if you do not have icecream moulds then you can use short glasses or any cup to make oreo icecream Popsicle.
4. Now put oreo icecream into the Popsicle moulds. Repeat the same process to fill all the moulds with oreo icecream.
5. Now spread oreo crumbs on top and gently insert ice-cream sticks.
6. Put the oreo icecream mould in a freezer for overnight or 7 -8 hours to get set.
7.Once set, take out from the freezer and leave it for a minutes or you can rub the mould between your palms so that sides will get loose from the heat of your palm. Gently hold the icecream stick and take out the oreo icecream posicles from the mould.
8.Oreo icecream popsicles are ready to serve.
9.Unmould oreo icecream at the time of serving and serve chilled.